Appropriate air traffic management allows reducing the impact of air operations on the environment. While caring for the safety of aircraft, the Polish Air Navigation Services Agency has been putting emphasis on environmental issues for many years. In its mission of responsibility, PANSA makes every effort to ensure that the undertaken operational activities contribute to measurable results in the form of reducing fuel consumption by aircraft and, consequently, reducing CO2 emissions.

The overall goal of the Polish Air Navigation Services Agency is to ensure safe, smooth and efficient air traffic. Where it is possible, the Agency is also implementing methods to reduce the negative impact of aviation operations on the environment. Activities in the area of ​​environmental protection are multithreaded and bring measurable effects. The solutions used by PANSA help reduce the amount of CO2 emitted to the air. Every day, PANSA ensures the sustainable development of navigation services while minimizing the negative impact of air operations on the surrounding environment. 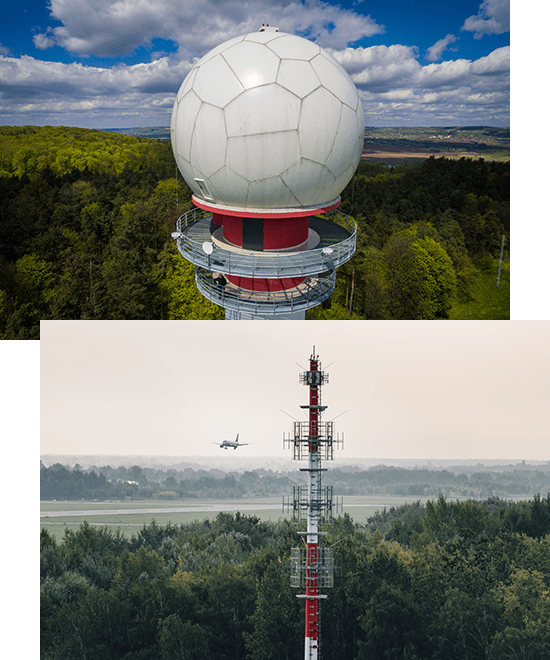 Since October 2009, "green approach" or Continuous Descent Approach (CDA) is one of the standard flight techniques performed by crews of aircraft arriving at the Chopin Airport in Warsaw, which is made possible by air traffic controllers.

CDA is an environmentally friendly technique for conducting aviation operations enabling the captain of an aircraft to perform a smooth descent for landing, preferably directly from the cruising altitude. In principle, the air traffic controller gives the crew freedom to adjust descent and landing approach profiles, so that the aircraft can descend with minimum thrust and avoid holding altitude. The use of CDA minimizes fuel consumption and reduces aircraft noise, while also reducing CO2 emissions. According to the indicator adopted by Eurocontrol in the European Aviation Environmental Report 2019, the CDA saves up to 46 kg of aviation fuel in one operation, which means that up to 145 kg of carbon dioxide will not be released to the environment. The fluctuations of these values ​​depend on the type of aircraft and the altitude at which this type of descent started. 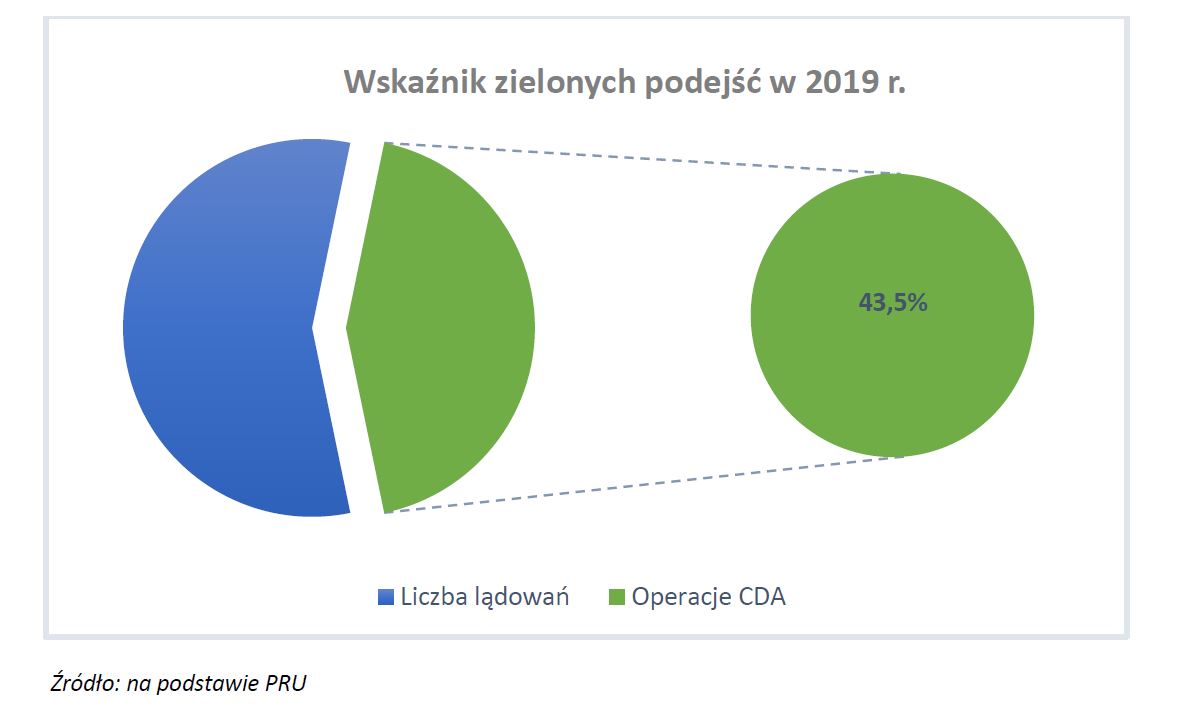 Today, the "green approach" is a technique increasingly used not only in Warsaw, but also at other Polish controlled airports. In 2019, Chopin Airport alone, out of 96 509 landings as many as 42.38% (PRU Data - Performance Review Unit) were CDA approaches. These operations allowed carriers to save up to 1 883 tons of fuel - thus up to 5,931 tons less carbon dioxide released into the air.

CDA is also available for landings in other Polish cities. Aeronautical documentation for individual airports more or less elaborately describes the procedures of a smooth approach to landing applicable at a given airport. The share of CDA operations, i.e. the ratio of "green approaches" to the total landings, varies at the largest airports in Poland in terms of the number of operations - from 35,33% in Poznań to as much as 51.68% in Gdańsk, which in comparison with European hubs can be considered a good result. In 2019, the application of the CDA procedure at six Polish airports with the highest traffic: Warsaw, Kraków, Gdańsk, Katowice, Wrocław and Poznań, allowed to reduce the potential carbon dioxide emissions to air by a total of up to 12,267 tonnes. It's about the same as the weight of a hundred empty Boeing B787-8 Dreamliner aircraft. 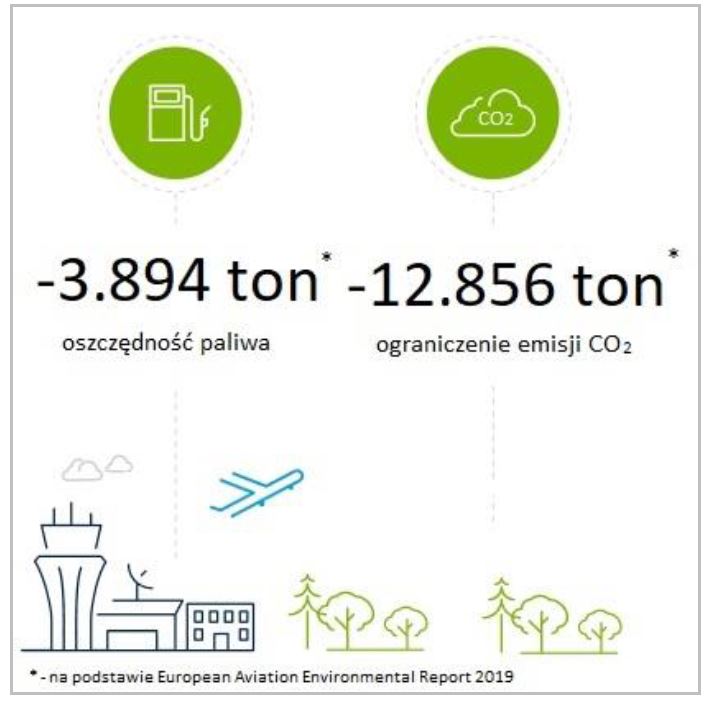 In 2019, performing CDA at nine main Polish airports allowed to reduce the potential CO2 emission by 12 856 tonnes. Paralelly, airlines were able to save up to 3894 tonnes of fuel. 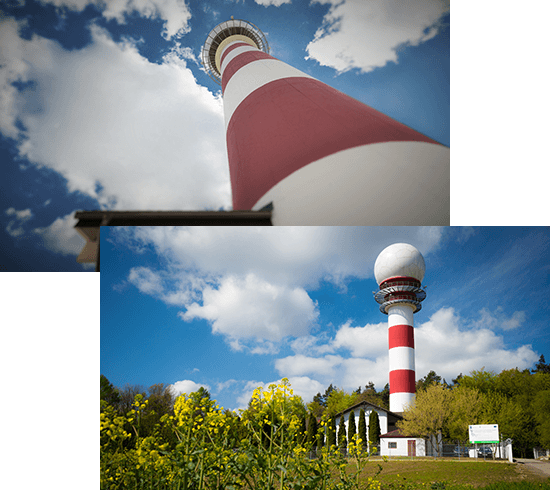 PANSA – we care about the ecology

PANSA’s other operational activities show savings and contribution to protecting the environment. The connections chain can be simplified to the common rule: the longer airmen are forced to keep their engines running, the longer aircraft produces pollution. Therefore – the shorter the route, the less fuel burnt, which equals to less CO2 in the air and better situation for the environment. Let’s not forget about the implementation of A-CDM (Airport Collaborative Decision Making) at the Warsaw Chopin Airport, which was possible thanks to the close cooperation between PANSA and the airport management. A-CDM helps ATCOs more effectively manage the traffic that is still on the ground, making it easier to predict and set the optimal engines start-up approval time – reducing the time needed for taxiing with engines running. Thanks to that solution less fuel is used by carries and it helps to reduce pollution and aircraft noise.

The Polish Air Navigation Services Agency also allows the airspace users to fill out flight plans for air operations in FIR EPWW without intermediate navigation waypoints. For carriers this means the ability to plan the route with the shortest total distance. This is yet another example of PANSA’s fruitful activities generating positive outcomes. In 2018, that attitude allowed to plan routes shorter by 502 922 NM in total, which equals to 3 520 tons of fuel saved and 11 088 tons less of CO2 produced.

What is also important, since February, 8th, 2019 the Free Route Airspace is implemented in the Polish airspace – known as POLFRA. It gives the airspace users the flexibility and freedom on the Level of creating flight plans, when routes can be planned only via FIR entry points without using the fixed airways. POLFRA allows for planning of the flight route through our airspace directly between entering and exiting navigation points, without the necessity to use the existing air routes network. Thanks to this solution, flights can be planned to be possibly closest to the actual shortest route, reducing time in the air and air pollution.

One of the main goals of PANSA ATCO’s is to minimise the impact of air operations on the environment. The obvious priority is to guarantee safety of the seamless air traffic in the Polish airspace. Whenever it is possible, however, PANSA’s operations personnel give pilots shortcuts to save time and reduce the distance. Those are allowed and accepted exceptions from carefully set eco-friendly and convenient flight procedures designed to provide order and safety to aircraft. Such permission however has to be given each time depending on the situation in the air – air traffic density, weather, etc.

Thanks to lowering the number of kilometres flown carriers save fuel, passengers save time, our environment is less polluted and people living in the vicinity of airports can be less affected by the aircraft noise. That positive impact is possible only thanks to the passion and professionalism of PANSA ATCO’s.

All activities of the Polish Air Navigation Services Agency in the area of ATM are dedicated to providing safe and secure air navigation services keeping in mind the environment and the comfort of airports’ neighbours. PANSA endeavours to fulfil desires of all stakeholders and to minimise aviation’s impact on the environment. 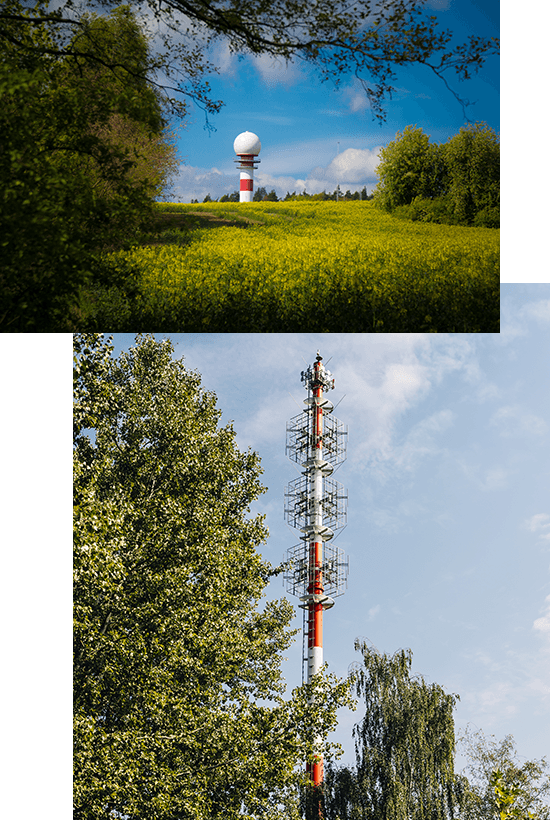 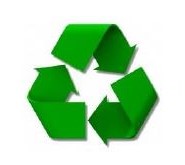 PANSA’s policy in the area of waste collection allows the Agency to segregate municipal waste according to international requirements. Also, all unnecessary electronic equipment goes to recycling. Thanks to an effective approach and awareness of PANSA’s personnel, 36.4 tonnes of paper, 1.4 tonnes of paper and 5.2 tonnes of plastic were collected to recycling bins in 2019.

PANSA eco-friendly approach is visible in current investments as well. The Agency is aware of its responsibility and reduces the environmental impact on every step, as much as possible. Another part of lighting was modernised in 2019, replacing old solutions with amodern and efficient LED lights. With a 5-times-longer lifetime and a lower energy consumption, new lights allowed to reduce the power consumption by 6.720 kWh. 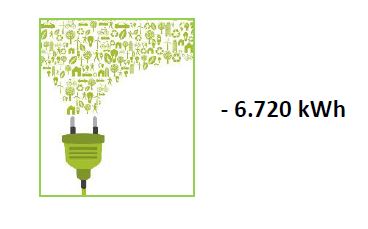